The First Americans: Indians throughout American History: This course tells the story of America’s strongest and most enduring people. Today, the Indian suffers the highest rates of unemployment, drug and alcohol abuse, domestic violence and a host of other social ills. Fortunately, as a people, they also possess the characteristic of surviving in the face of monumental changes that accompanied the arrival of Europeans.

For more than 500 years the Indian has navigated a changing world and along the way added their unique contribution to the story of the United States. The popular history of the American Indian is often one of biased telling.

The truth is even more interesting and exciting. From first contact, the Indian has been a contributing group in the development of our Nation, and along the way made some surprising and impressive statements of what it means to be Indian.

Some of the amazing personalities you will learn of in this course include:

Ely Parker – The Seneca Indian who attained the rank of General in the U.S. Army, was a member of Ulysses S. Grant’s staff and drew up the terms of surrender at Appomattox.

Jim Thorpe – Sac and Fox Indian from Oklahoma. Considered by many to be the Greatest-Athlete-of- all-time. A member of the Pro Football hall of Fame, Thorpe also played professional basketball and baseball and won gold medals in the pentathlon and decathlon at the 1912 Olympics.

Squanto – Who escaped slavery in Spain and made his way to England and eventually back to North America where he played a key role in helping the Mayflower Settlement survive.

Pocahontas – The real story of the “Indian Princess” and the role her son played in World History.

Ira Hayes – The Pima Indian who joined the marines and became famous as one of the flag-raiser on Iwo Jima in World War II.

We will also cover important topics including:

What really killed 80-90 percent of Indians — it wasn’t the white-man.
How one item from native culture has killed hundreds of millions of non-Indians.

What the Founding Fathers really intended for Indian nations — contrary to political correctness, it wasn’t racist.

The fight for U.S. citizenship.

The Trail of Tears – not just the Cherokee, but 37 other tribes as well.

Indian Code Talkers — the Navajo weren’t the only tribe or even the first to use their language skills in war.

Why Indians join the U.S. Military in greater percentages than any other racial group.

The Treaty of Watertown – Made with the Mi’kmaq Tribe in 1776 to fight the British, it is the first United States first foreign treaty.

How Indians learned to use the law against illegal land grabs.

Indian Gaming – The New Buffalo or not?

How Tribes are using economic development to improve their situation today.

Why the 1,400 members of the Southern Ute Tribe in Colorado are worth $4 billion. 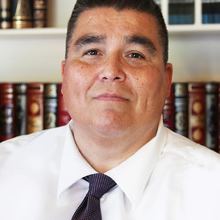 Calvin Harper is a Native American from the Mi’kmaq Tribe of the Algonquin Nation. He is the first person in his family to attend and complete college. He holds a bachelor’s degree in Sociology and a master’s degree in Public Administration from Brigham Young University. He also earned a Juris Doctorate from Columbia University School of Law. He believes that education is an essential step in making a difference and helping individuals and nations to reach their highest potential. Mr. Harper was the first official employee of the National Museum of the American Indian at the Smithsonian Institution in Washington D.C. Mr. Harper has worked as an attorney, university professor, publisher, consultant, commentator, podcaster, employment coach, author, editor, and entrepreneur. He is currently a contributing author and editor for Certification Magazine. He frequently states that he is well acquainted with disappointment and hardship since he is a Boston Red Sox fan.When asked to describe his interests and hobbies, he states: “I have a passion for America, its origins and its singular place in the world. I love to read and write and have a special affinity for history, politics, and government.”
Sign up now!
We suggest moving this party over to a full size window.
You'll enjoy it way more.
Close
Go Fullscreen